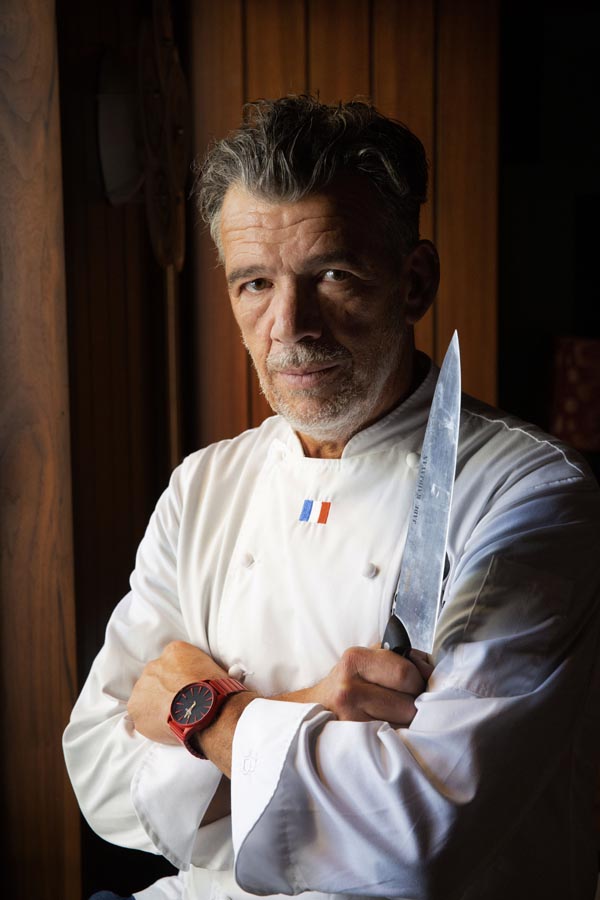 Marc-Henry Vergé alias “MHV”? He is the man in the shadow of the Bertrand group, the one who screws the bolts, gives good and bad points, reviews the quality upwards, wherever he intervenes. A brasserie on board a station, a century-old institution, a specialist in sauerkraut, offal or fish, everywhere MHV leaves its mark. This cotton boy, at the time when Benin was still called Dahomey – his father, a native of Bearn, like his mother, also had an industrial bakery there – is a night worker who has never let go since of its beginnings. He started his career at a good pace at Potel & Chabot in 1990. He was there for ten years, alongside Jean-Pierre Biffi, who worked at Crillon with the Constant team (” a great coach“, he notes respectfully), before rubbing shoulders with the world of haute cuisine and contributing to the opening of the Four Seasons George V in 2000 as assistant chef to the rigorous Philippe Legendre. The rest we know: they won, just two years later, the supreme anointing of 3 stars. 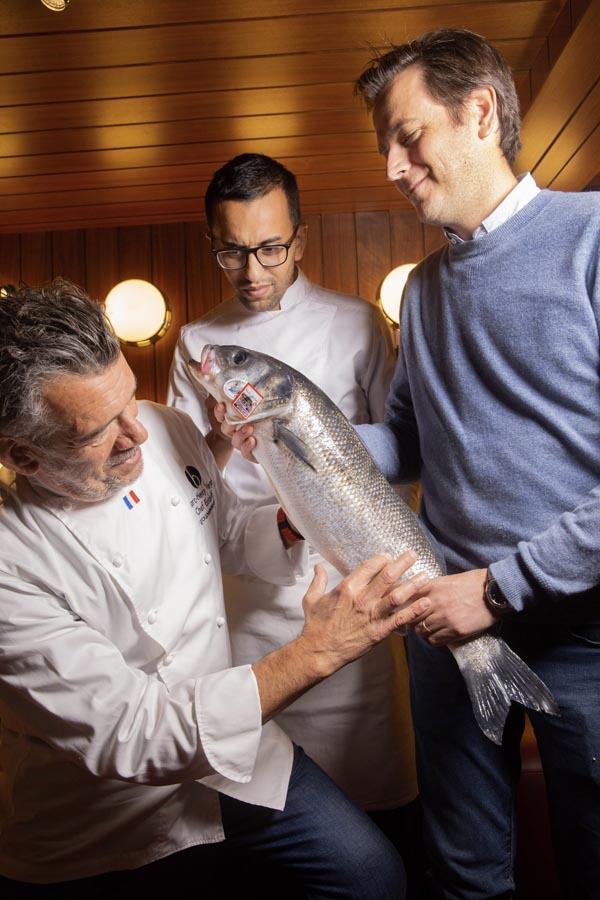 Afterwards, MVH will be chef at Fauchon for three years. He then joined Groupe Bertrand in 2012 (“ a bit by chance… it was a matter of making a substitute… “). He became its executive chef from 2015. He is still present every day, navigating from one house to another, overseeing about 1,000 units in total, including 22 prestigious brasseries in Paris. He is in charge of designing all the menus, respecting the diversity of the brands that make up this heavyweight restaurant whose scope extends from historical and mythical places (from La Coupole to Lorraine, from Lipp to Vaudeville, from Terminus Nord in Bofinger, not forgetting Pied de).Cochon and Alsace on the Champs-Élysées), trendy restaurants (PVH, Sir Winston, Polpo, Auteuil Brasserie, Ile a Issy-les-Moulineaux, Copenhagen) and more standardized ones like Au Bureau, Léon (formerly Léon de Bruxelles), Bert’s, Volfoni or Hippo. 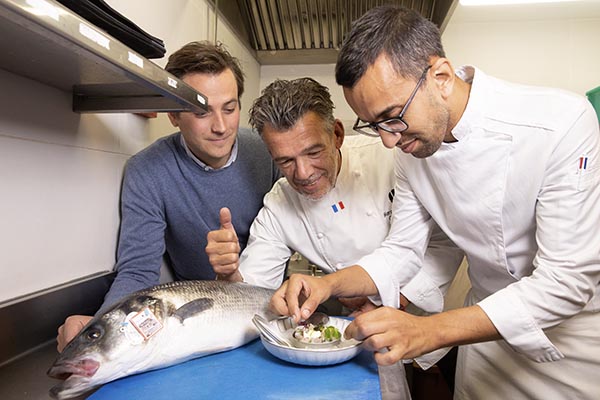 In the kitchen © MR

To this born woodcutter, Rungis is better than a passing place or a myriad of beautiful addresses, but ” a gold mine“…” It is amazinghe said, it is also the largest market in Europe, a group of enthusiasts who bring the best products from small producers and is a permanent source of inspiration, serious and creative.. I go there regularly to immerse myself, get inspired and discuss with partners to create future recipes. It often happens to me that a supplier challenges me: ” Here, Marc, I have this rib – and I pass behind the workbench answering him “ could you cut it for me like this? » My view of things is that we have to rely on the experience and know-how of our suppliers » 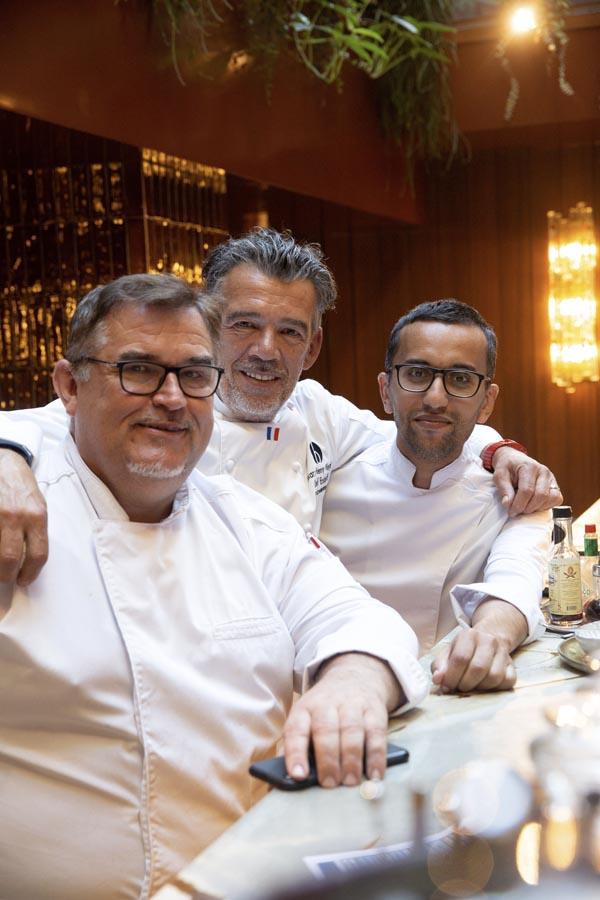 With the Petit Victor-Hugo team © MR

The current favorite at Groupe Bertrand? Without a doubt, it is Petit Víctor Hugo, aka the PVH. This vast marine house with an elegant and luminous setting revisited by the favorite decorator Laura Gonzalez, is located at the elegant 16, avenue Victor Hugo, a few steps from the Saint-James hotel on the avenue Bugeaud, a Relais & Châteaux jewel and star table, owned by Olivier Bertrand in his own name. ” To the HPVMHV rating, we are committed to promoting an eco-responsible nautical menu with seasonal products. We respect seasonality, fishing areas with precise specifications. “. Your number 1 supplier?” Demarne frères that perfectly meets our specifications. It is the preferred and trusted partner for fish and seafood products, it is also the one that supplies Léon (in mussels, as in lobster, etc.) and Parisian brasseries such as Lorraine, Bofinger or Terminus Nord… . For the PVH, deliver the beautiful banks, Saint-Gilles-Croix-de-Vie sea bass, line fishing fish. »… 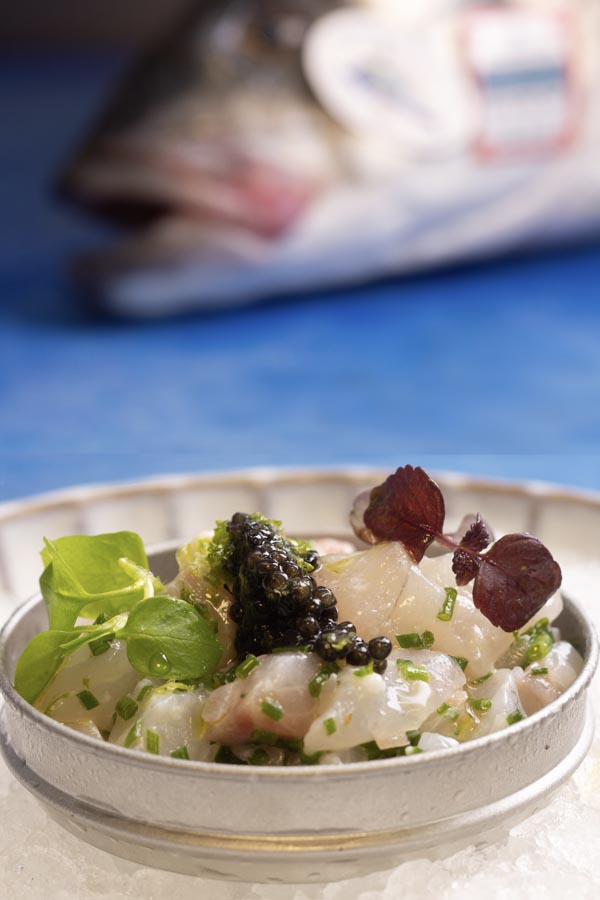 And MHV to add: ” they are quite a proposal: every morning, they call the head of the PVH and we work on the beautiful products of the moment according to the arrivals and the elements validated with our purchasing department. “. Outside of Rungis, directly, he trusts Renaud Sigrist, a demanding fishmonger from Locmariaquer in the Morbihan who “ provides the clams, giant cockles, collects and refines them, they arrive ready to use “. For the meat, he works with the Bissonnets from the Boucheries Nivernaises. ” They bring their animals, the carcasses, they mature them. It is cut at 4 in the morning, with exceptional craftsmanship and beautiful products. “. For fruits and vegetables, trust Charraire and its Vergers Saint-Eustache-” they have long had a policy focused on small producers, whether in herbs or in all product categories »… 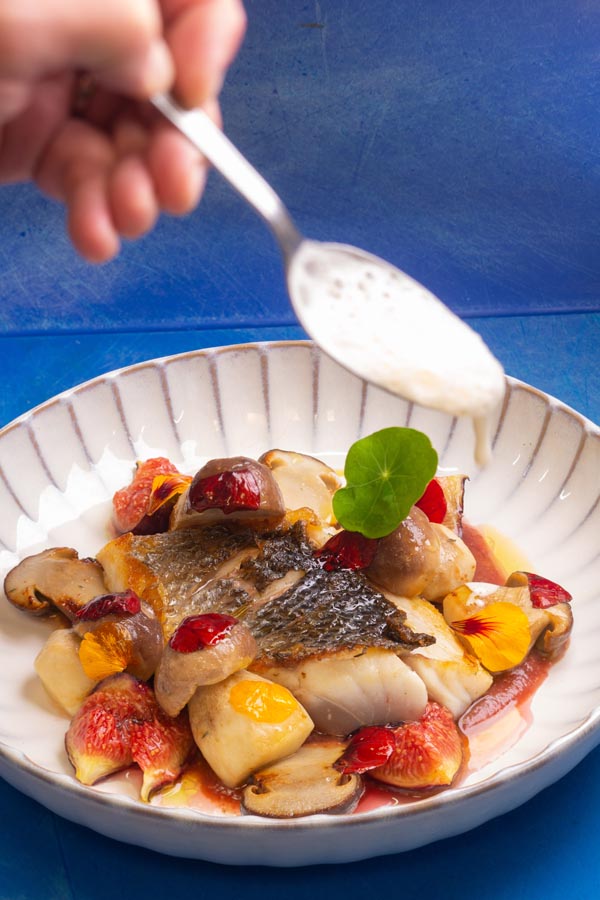 As for the spices, he turns to SPICE: “oWith recipes made together, they have an excellent range of products, varied, rich, that satisfy all needs “. At Les Champignons des Bois, autumn products, oyster mushrooms, ring mushrooms, button mushrooms include ” always at the forefront of the genre “. And outside Rungis, the fruits and vegetables of Laurent Berrurier with his extraordinary garden under the sign of “Boots en Ville”, in the Val d’Oise, are among his trusted houses. For sauerkraut, the products from Chedeville’s fine charcuterie and sausages (which also supplies Lipp’s famous stuffed pig’s foot). The Bertrand Group’s stated aim for the world of breweries is simple: ” increase quality and lower prices with the desire to recapture a Parisian clientele in these historic brasseries inseparable from the gourmet soul of the capital.e. on purposeadd, even in these inflationary times we make it a point of honor not to raise our prices because we prefer to have full restaurants “. In total, ten people work in the “buying” department, divided into five main areas: fruit, vegetables, dairy, meat and seafood…. They are the ones who negotiate daily according to the wishes expressed by the chefs and the needs of their customers menus 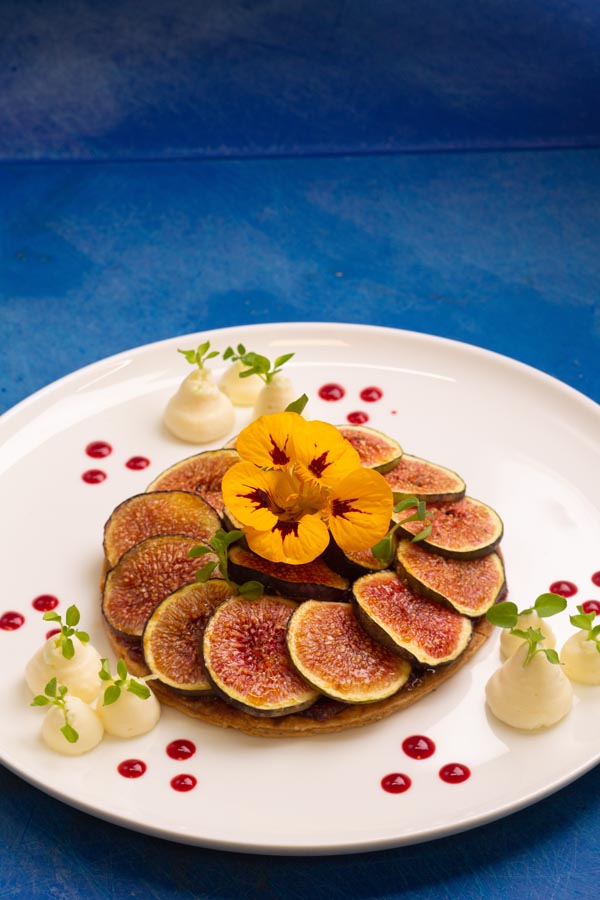 ” For Parisian brasseries and restaurants, the menus are renewed four times a year, according to the seasons. » Also with one-off operations that can be extended, such as the lobster mac’n cheese that we debuted at Polpo and which has been a great success. » For the design and development of maps, it is “a permanent exchange. “Although MHV defines the culinary direction and benefits from a strong autonomy to develop the recipes, it does not move forward alone and celebrates the fact of constantly being” surrounded by good people “. Thus, it relies permanently on the feedback and expertise of marketing and purchasing people and works in concert with the various managers of establishments who actively participate in the development of permanent proposals, and frequently express the will to work as a seasonal product. 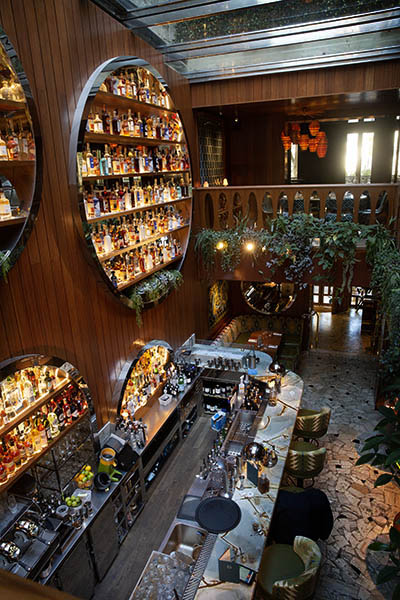 In addition, each branch has a technical director who guarantees the quality and consistency of the offer (there are three in the world of Parisian brasseries, for example). Constant attention is paid to products that mobilize all the actors involved (cooks, technical directors, purchasing department, marketing, etc.) There is a day when we do a tasting of products that could fit on the menu. It is from here that we dedicate ourselves to the creation of recipes » 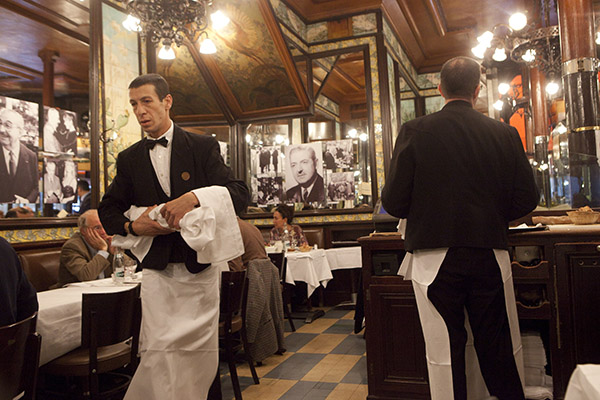 If you ask MHV how he manages to intervene and alternate very different universes (from the high-end brasserie to Au Bureau – Hippopotamus or Léon), he answers bluntly: “ it’s always the same job, it’s cooking. The limitations just aren’t the same. The important thing is not to get stuck, always keep that creative side and try to create that little click in the customer. The important thing is to position yourself well, understand what the gourmet expects and give him a different experience.. At the Bertrand Group we are constantly trying new things. If it doesn’t work, we change “. 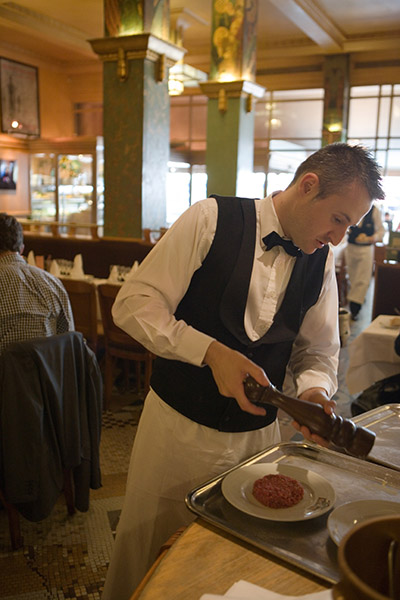 Service in the Dome © MR

” Chez Leonalso points out, we have just finalized the winter menu of which I am very proud and which testifies to the good development of the brand. There is a good mussel gratin with parmesan, maroilles croquettes, a maroilles hamburger but also a Demarne sole and lobster meunière, haddock gratin with spinach.“. Between the awakening of the sleeping beauties and the new concepts, the Bertrand group, reviewed by the samurai of the MVH stove, looks like a locomotive pulled up. Dynamic brands and franchises are being developed, such as “Au Bureau” which now has more than 180 establishments throughout France. Also worth noting is the strong growth of the Italian concept “Volfoni”, born in Boulogne, which now has 15 units. 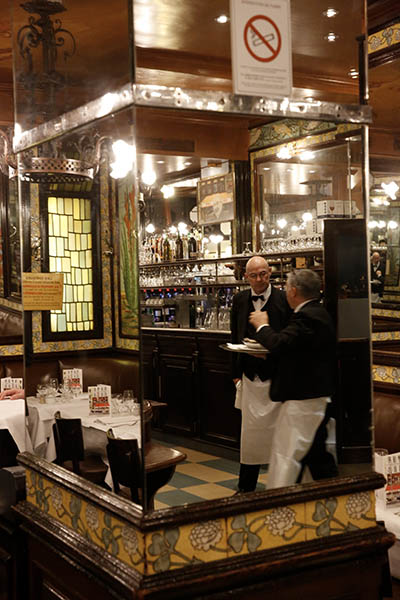 For the latter, a great sourcing job was undertaken to better support this ambition with, in particular, ” great products ” selected directly with small Italian producers but also a long-term complicity with the partner and specialist in Rungis Carniato. In short, nothing escapes the finicky MVH that doesn’t stay in place and whose whereabouts you never know. ” There is much to do and much to seepoints out, that my job is above all to forge bonds, listen, understand and communicate... » 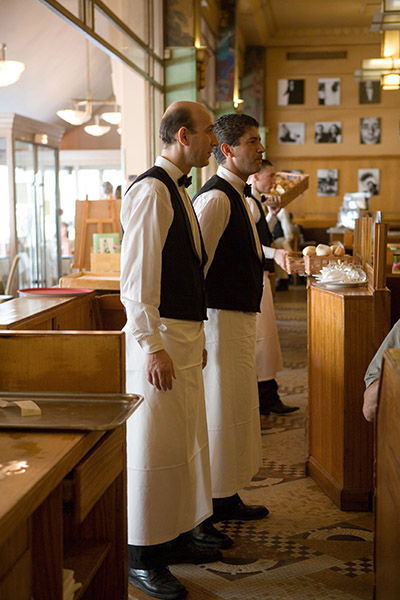 Waiting service at the Coupole © MR